Lead your troops onwards to victory 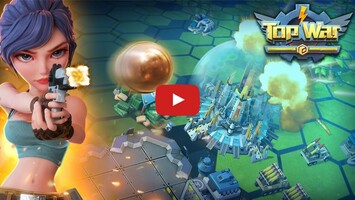 Advertisement
Top War: Battle Game is a strategy game where you dig deep into the depths of a large island to build a top secret military base. In order to do so, you're going to need to enlist the aid of all your troops to increase protection from enemy offensive attacks.

The way to play Top War: Battle Game is very simple. It's based entirely on swiping in order to drag each item over the right square on the map. Essentially it all comes down to investing all the rewards you harvest to increase the level of each construction, as well as your strategic placements. Similarly, it is very important to level up your troops so they are sufficiently equipped to strike fast once battle has begun.

When it comes to fighting, it's up to you to combine soldiers appropriately build more powerful ones. This is achieved by dragging each character over another of the same type to form a troop. Prepare your soldiers to obliterate enemy offensive campaigns by following the same process to combine formations. You'll wind up building a territory that is more and more extensive and increasingly taxing for rivalling outposts to overcome.

Top War: Battle Game is equal parts strategy and action. It's a game where it's non-stop swiping to intelligently link up elements on the board (within a charming island setting) is the endgame. No doubt, we're looking at a super fun title, full of intricate details to enjoy creating a solid strategy laying down the groundwork for your troops to overcome each enemy incursion.
Reviewed by Carlos Martínez
Advertisement

Why is this app published on Uptodown?
(More information)

Topwar game 6 months ago. The game is really great, or it would be. You evolve through stages and skills, but it is impossible for you to beat opponents with a few stages above you. Then it becomes a ...

The game experience is very good, much better than other games of the same model. The graphics and gameplay are also very distinctive. Very good game, can still make friends on it, but the stored valu...

Car Parking Multiplayer
Drive around an extensive map for a realistic parking experience
Clash of Clans
Crush enemies and lead your clan to glory
Mobile Legends
An excellent, but shameless, League of Legends clone
Scary Teacher 3D
Escape the terrifying teacher!
Bus Simulator Indonesia
Drive a bus through Indonesia with this simulator
Clash Royale
Clash of Clans characters face off in epic duels
Vegas Crime Simulator
Try not to get caught breaking the law!
Clash Mini
Play with tiny Clash of Clans characters

Merge Home - Design Dream
Pro League Soccer
Play exhilarating soccer games on your smartphone
Chess at ICC
Join this prestigious community of chess players
Flip Trickster
Jump, do tricks, and try to land on your feet
Clicker Racing
Magic Drawing
EI Plus
The best soccer and other sports are in store for you
Puzzle Glow